Because Catie and I are totally awesome...here's this glimpse of Halloween's past. 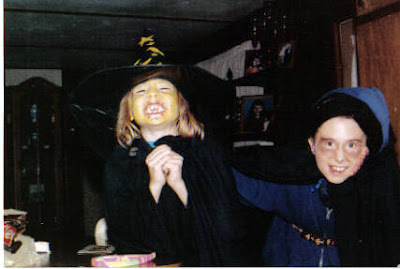 I guess it's pretty clear we've loved Halloween for a long time! And if anyone is wondering, I was Igor from Young Frankenstein. Awesome. Sauce.
-over and out-
Posted by Betty (Beth) at 4:21 PM No comments:

Wrote this today because I'm practically jumping out of my seat at the thought of being in Europe 8 weeks from now. Enjoy.
GIDDY!
I am going on a trip and I feel like the monkey in Cloudy With a Chance of Meatballs.
EXCITED! STEVE!
Able to speak only in one-word bursts of emotion.
IRELAND!
GERMANY!
HOME!
Home is where your heart is; my heart has shipped itself in a crate to Bavaria. It's munching on a pretzel, drinking a Warsteiner and wondering when I'm going to catch up with it.
VACATION!!!
"We're on vacation!" she sings in Light in the Piazza. Joy beaming from every ounce of her body, a simple mind saying outloud exactly what I am feeling.
I WANT TO LEAVE NOW!
8 weeks to go.
-over and out-
Posted by Betty (Beth) at 11:32 AM No comments:

Email ThisBlogThis!Share to TwitterShare to FacebookShare to Pinterest
Labels: Poem

For linking me to this. 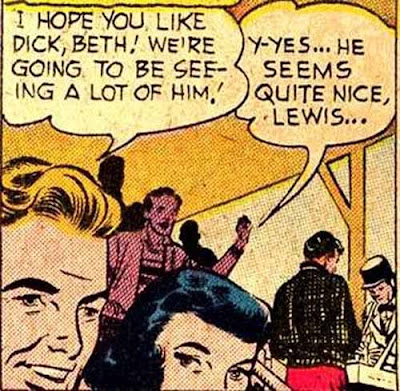 (Taken from Mitchel Comics Group)
Awesome Sauce.
-over and out-
Posted by Betty (Beth) at 11:29 AM 1 comment:

A SHOW YOU THOUGHT YOU WOULDN'T LIKE, BUT ENDED UP LOVING.
Last year, if I had been asked what show I would 'never' watch, I would have said American Idol. Idol stood out in my mind as the epitome of horrible music and teeny-bopperness.

But then something horrible happened.

(reenactment - the names have not been changed to protect the innocent)
Beth: What the heck is this on our DVR?
Daniel: Heeheee
Beth: WTF??
Daniel: I think we should watch it this year.
Beth: ..... (waits for the punch line)
Daniel: (pushes play)
Beth: (still waiting for punch line)
It was funny. I had to give it that. And in between the funny parts were some good parts. I was impressed and not-so-impressed and wow'd a couple of times. Plus, we loved watching Steven Tyler and J Lo, and making fun of Randy and Ryan Seacrest. By the time the Hollywood Rounds started I had to admit that I geniunelly liked American Idol.

Maybe it's because I had never watched it before, or because this season has good talent or because J Lo is just so darn pretty, but we both watch it every week. We've voted. We've crossed our fingers for our favorites and been shocked when those favorites get the boot.

Looking back now, I'm not sure why I ever thought I'd dislike this show. Music, singing in particular, is a giant part of who I am. So a giant national talent show should have been right up my alley. Granted, in the end, I suppose it will probably just end up being a Giant Popularity contest, but I suppose that's what being an entertainer is all about.

"I am the entertainer,
And I know just where I stand:
Another serenader,
And another long-haired band.
Today I am your champion.
I may have won your hearts.
But I know the game,
You will forget my name,
And I won't be here
In another year,
If I don't stay on the charts"
-Billy Joel

What else was did we used to hate?
Jessie
Brenda
Nikki
Dany (to be published)

Best Scene
This one is a short one, but only because there is no need to expand on something that is already perfect.
I love The Muppet Show.

What other scenes are the beeeeest (as Wario would say)?
Jessie
Brenda
Nikki
Dany
Posted by Betty (Beth) at 10:55 AM No comments:

Other Blogs I Read